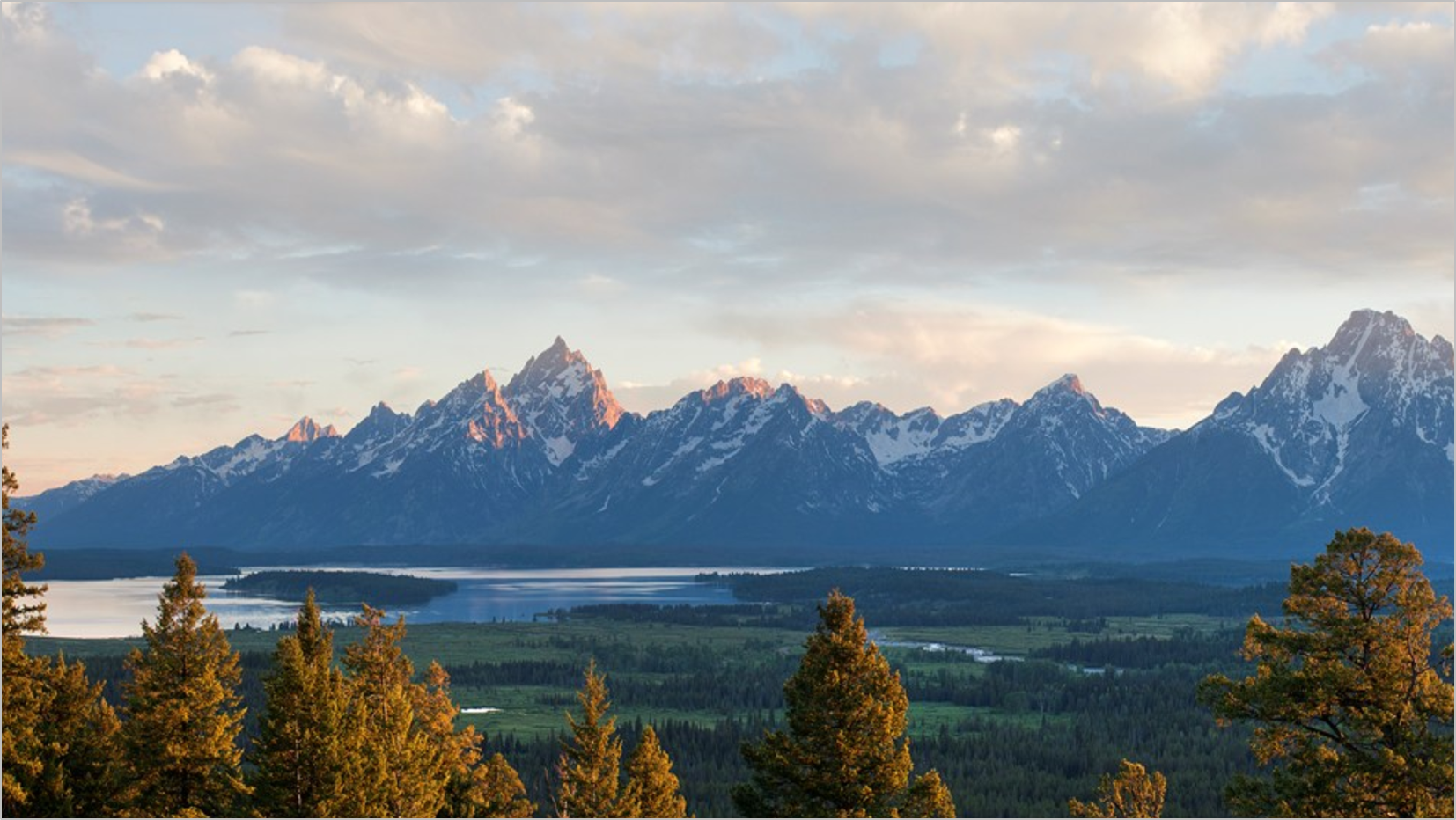 Jackson Hole, Wyoming, a valley nestled in the Grand Teton Mountain Range, is the unlikely setting of a meeting annually of many of the world's top economists.

On Friday, Federal Reserve Chair, Janet Yellen, addressed the gathering at the annual Jackson Hole Economic Symposium at the Jackson Lake Lodge, and she said an interest rate hike was likely by the end of the year. Yellen also said the slow growth rate of recent years could remain in place in the years ahead.

"U.S. economic activity continues to expand, led by solid growth in household spending," Yellen said. "But business investment remains soft and subdued foreign demand and the appreciation of the dollar since mid-2014 continue to restrain exports. While economic growth has not been rapid, it has been sufficient to generate further improvement in the labor market."

If the economic data continues to remain positive, as it has been for many months, an interest rate hike could occur as early as mid-September, when the U.S. central bankers next meet. However, if the job market and GDP growth show weakness, the Fed may put off a rate hike until November or December. 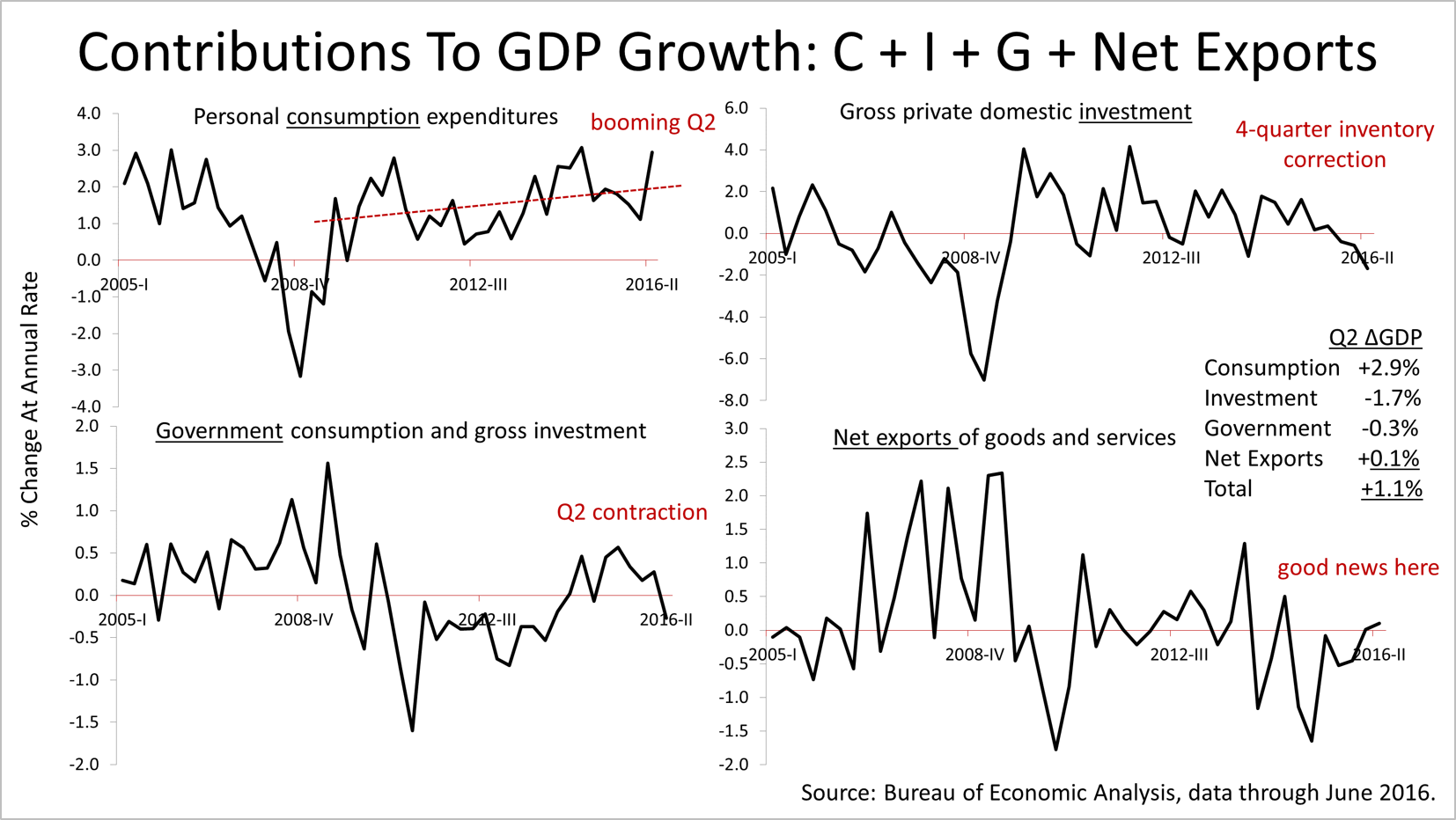 On Friday, the Bureau of Economic Analysis released its second estimate for growth in gross domestic product for the second quarter. The BEA trimmed the estimated growth rate by one-tenth of 1%, to 1.1%.


While the GDP growth rate was trimmed, the BEA revised higher, by two-tenths of 1%, the contribution that came from personal consumption expenditures, which is positive. Still, the GDP growth figure was a disappointment.


Fritz Meyer, an independent economist, said that inventories held by companies have declined for four consecutive quarters, which could explain the sluggish GDP growth. "The inventory decline is highly unusual and suggests a snap-back could be just ahead," said Meyer. In addition, consumer spending has been booming, and that could provide the economy with a boost. "Don't be surprised if we see GDP growth in excess of 3% in the current or subsequent quarters ahead." 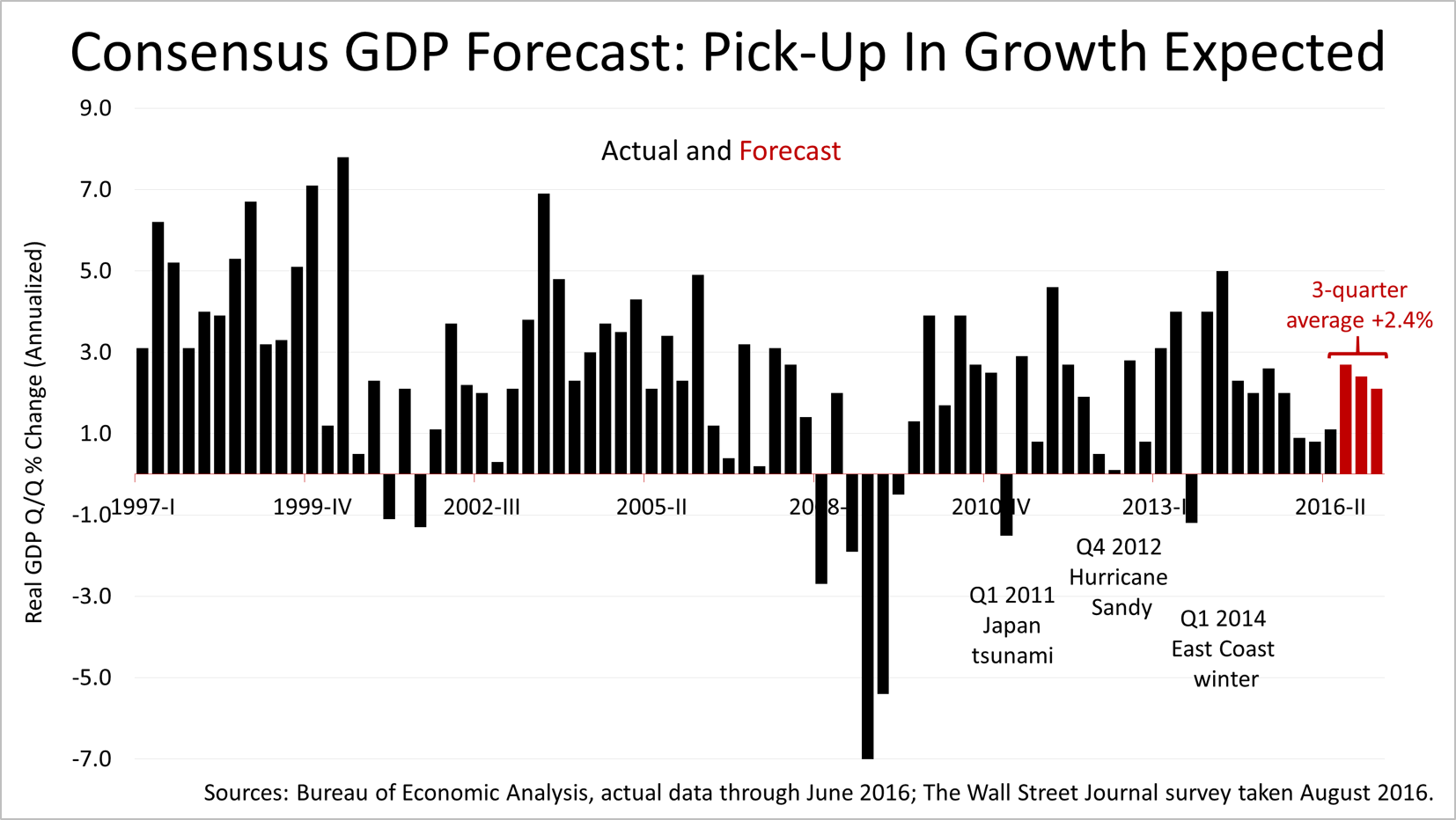 In early August, The Wall Street Journal surveyed approximately 70 economists on their quarterly GDP growth forecasts through the first quarter of 2017. Strengthening in the rate of GDP growth is expected in the quarters immediately ahead. 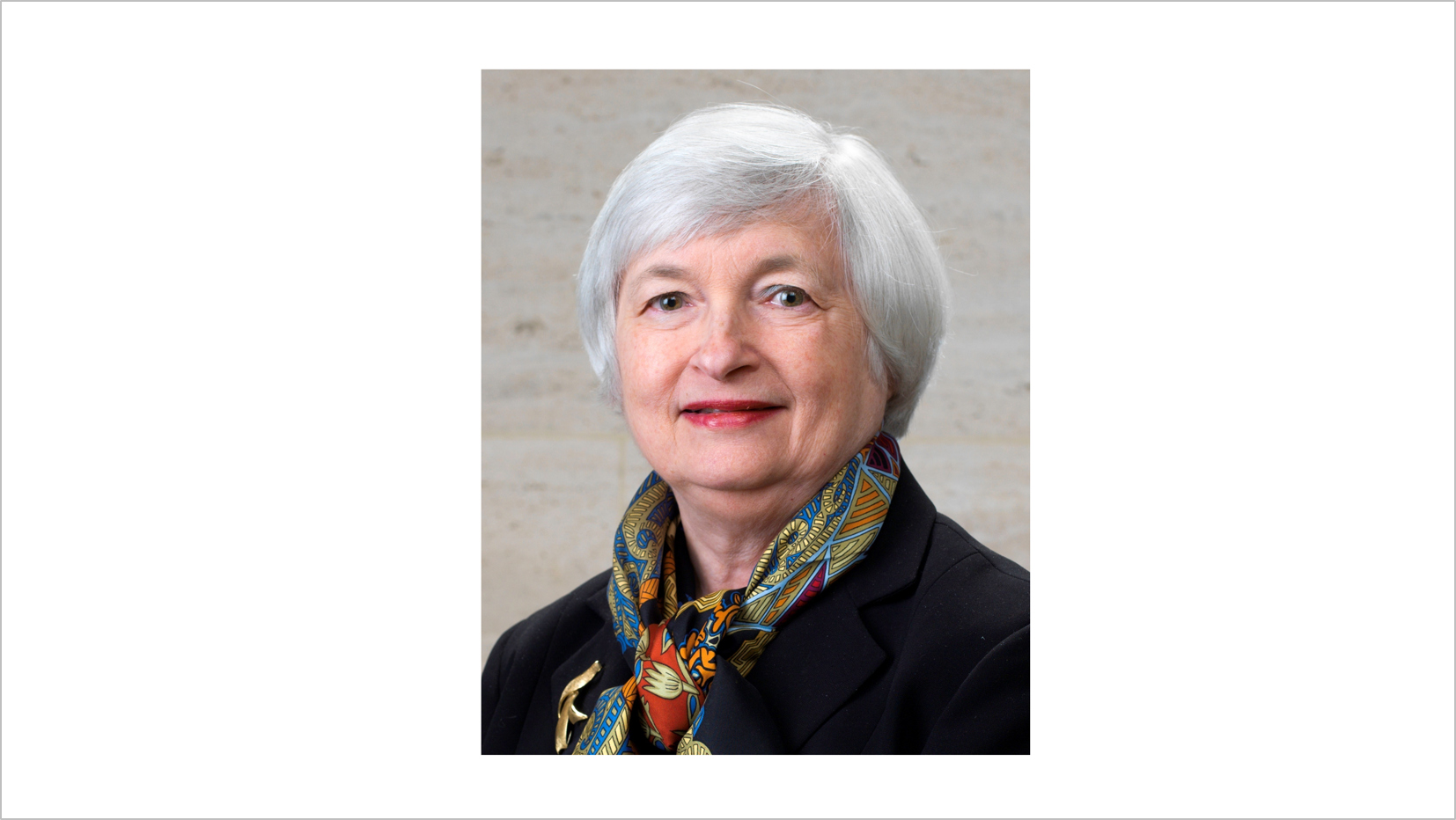 Fed chair, Yellen, alluded to the slow growth rate in her speech but offered little comfort to those who would like the U.S. to return to the faster GDP growth seen in decades past.

"Several developments could have contributed to this apparent decline," said Yellen, "including slower growth in the working-age populations of many countries, smaller productivity gains in the advanced economies, a decreased propensity to spend in the wake of the financial crises around the world since the late 1990s, and perhaps a paucity of attractive capital projects worldwide. Although these factors may help explain why bond yields have fallen to such low levels here and abroad, our understanding of the forces driving long-run trends in interest rates is nevertheless limited, and thus all predictions in this area are highly uncertain." 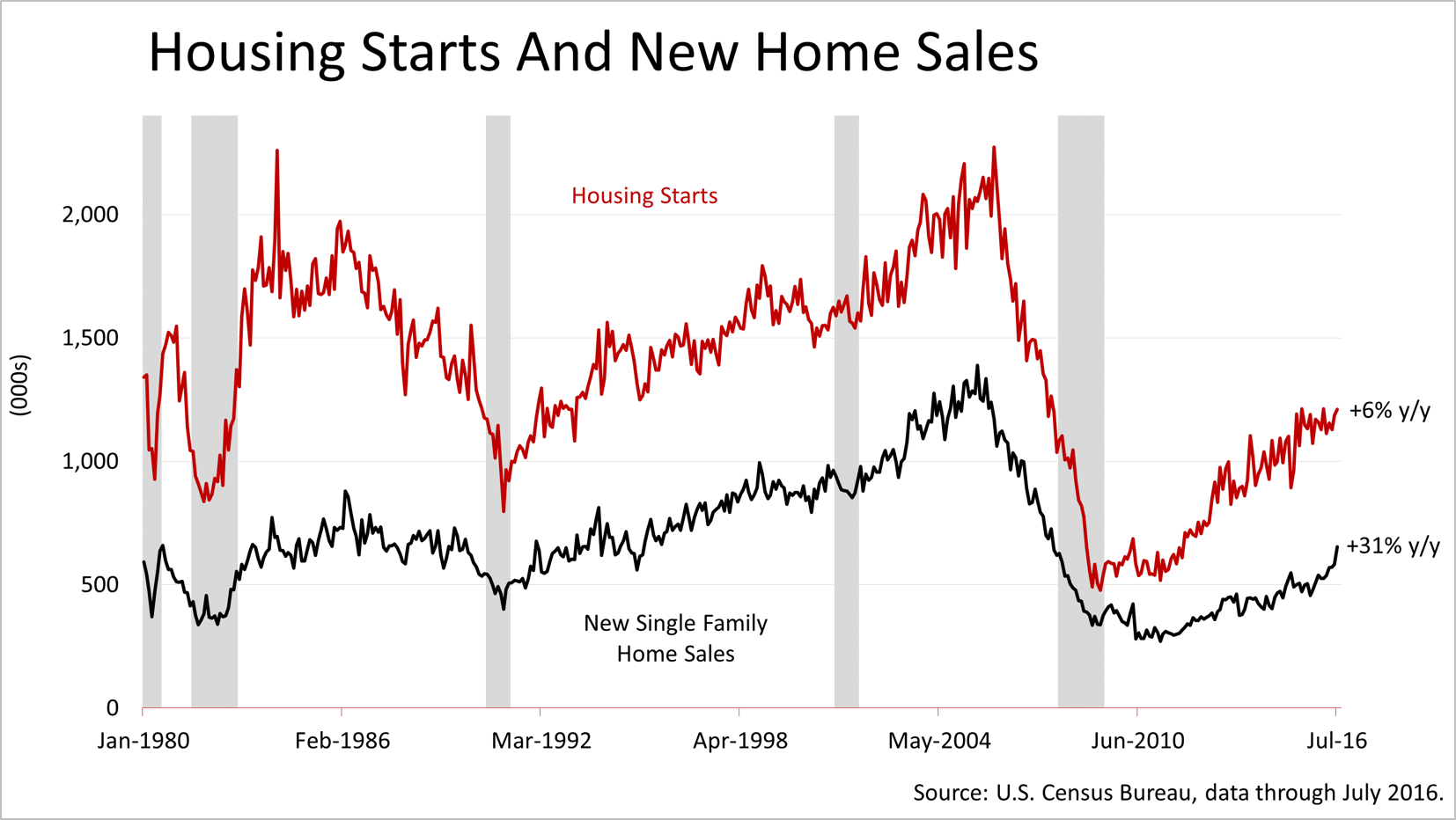 Despite Yellen's cautious comments, the long economic expansion is continuing and July's new-home sales were very strong, up 31% year over year. That is a strong indicator that new home construction, a material contributor to overall GDP growth, should continue to rise. 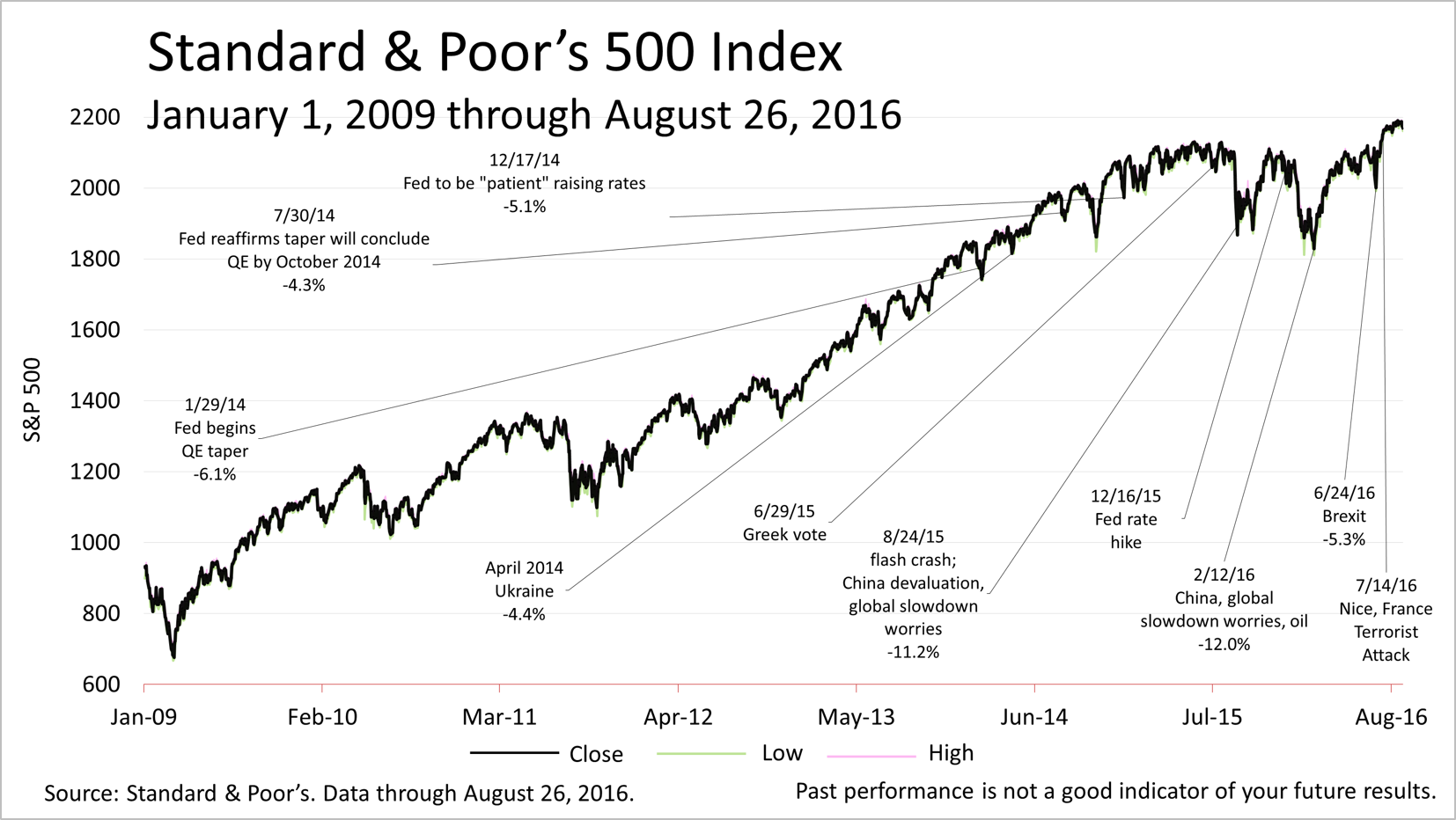 The Standard & Poor's 500 slipped by two-tenths of 1%, to close at 2,169.04. Stocks remain near their all time high and susceptible to a correction in the event of unexpected bad news or an emotional change in sentiment, but economic fundamentals driving stock prices continue to point to an uptick in growth.

This article was written by a professional financial journalist for avery wealth and is not intended as legal or investment advice.

Talk to Us Today

Sign up for the latest on retirement and investing

Get Our Best Thinking